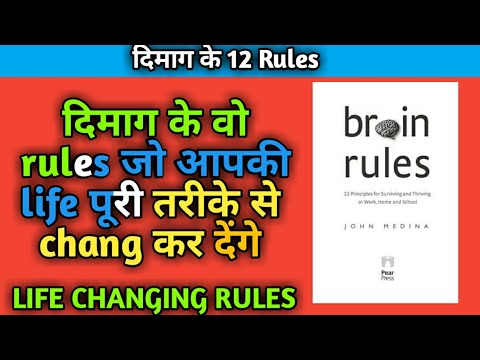 This book does a tremendous job of distilling scientific research into how the brain works and presenting it in a neat, organized manner. While there is obviously a common unifying theme that runs through the boo, each chapter is self-contained in that it covers a single topic and the research around it. In almost all cases findings are presented backed by scientific, peer-reviewed research, except in those cases where there is not sufficient research, where the author points that out himself " supporting research for each of my points must first be published in a peer-reviewed journal and then successfully replicated.

Many of the studies have been replicated dozens of times. This book is also an attempt to disabuse people against what are mostly urban myths and plausible-sounding theories of brain development, peddled by marketers with noble and not-so noble intentions. Each chapter in the book is organized around a single theme, or "rule", that describes an attribute of the brain. For the sake of context, here are the rules: Exercise - get the butt off the couch; it may help you think straight and live longer Survival - our brains evolved to help us survive in the Savannah, to avoid becoming food.

The rest is detail. Wiring Attention - we cannot pay attention for more than 15 minutes at a time Short-term memory - remember the magic number seven, plus or minus two. Long-term memory - it can take years, even decades for some memories to truly become embedded in our brains. Sleep - the less sleep you get, the dumber you can get. A short nap in the afternoon can do wonders for our concentration and productivity. A siesta is really not a bad idea. Workplaces refer to these as post-lunch meetings. Stress - it's not good for your heart, it's not good for your brain. Sensory integration Vision - our eyes can deceive us. Our eyes have evolved to help us survive, first.

Ogling came much later. Gender - yes, there are some differences that can be explained by gender. But do not believe the ancients, like Aristotle who remarked, " Some chapters you will naturally be more interested in, while others are informational without being too entertaining, so to say. For me, the most interesting chapters were the ones on memory both short-term and long-term , stress, and sleep.

A quibble, minor if you don't particularly care about references in books. The author states that to keep the book "reader-friendly" extensive references are available at www. I actually found this distracting. I am used to flipping to the end of the book where the references are noted, and then back to the page I was reading. Reading an ebook on the Kindle makes this job of navigating to a reference at the end of the book easier though Nicholas Carr may disagree.

Having to go to a web site is a distraction - the author should know that. Secondly, the website itself is not very well organized if all you are interested in are the references. You have to click to go to a different page for each chapter rule in the book, and from that page click on a link at the right that reads, " References for this rule [PDF] ". These could so easily have been included in the book itself. Keep the online references too by all means - they can serve as a place where these references are updated and new ones added. Thirdly, the book itself does not contain any numbering of the references within the text, so it is doubly difficult to figure out where in the PDF of references for a chapter to look for as a reference to something you have read in the book.

This is certainly one experiment that has failed. Ever wonder why the sages in ancient India developed the science of yoga? Even though these sages were supposed to sit and meditate on the meaning of life? And in which case what was the use for doing artistic aerobics? Well, yoga is exercise that is nectar for the body as well as the brain. What held true for the sages thousands of years ago is relevant even today.

A lifetime of exercise can result in a sometimes astonishing elevation in cognitive performance, compared with those who are sedentary. Exercisers outperform couch potatoes in tests that measure long-term memory, reasoning, attention, problem-solving, even so-called fluid-intelligence tasks. Most important, these data, strong as they were, showed only an association, not a cause. In the laboratory, the gold standard appears to be aerobic exercise, 30 minutes at a clip, two or three times a week. Add a strengthening regimen and you get even more cognitive benefit. Exercise improves children. Physically fit children identify visual stimuli much faster than sedentary ones. They appear to concentrate better. It just sat there like an inert pile of clay" p.

The fact that the brain can consume massive amounts of energy also helps explain why we get tired even when we are sitting in a chair, but thinking furiously about some problem. The brain is at work, and it sucks in energy in huge gulps. When the brain is fully working, it uses more energy per unit of tissue weight than a fully exercising quadricep. In fact, the human brain cannot simultaneously activate more than 2 percent of its neurons at any one time.

More than this, and the glucose supply becomes so quickly exhausted that you will faint. Did you get that? The oft-repeated truism that we use only 2 percent of our brains is only partially true. The fact, as it turns out, is that we cannot physically make use of more than 2 percent, at ANY given point in time. This little, but significant, distinction is often lost in repetition.

Ever heard about the brain being described as a muscle? That is pretty much an accurate description of the brain. It is indeed like a muscle. And like muscles, it becomes stronger with use and exercise. The brain acts like a muscle: The more activity you do, the larger and more complex it can become. Whether that leads to more intelligence is another issue, but one fact is indisputable: What you do in life physically changes what your brain looks like. The human brain has evolved, too.

The human brain has developed an extraordinary ability to think symbolically, but "[o]ur ability to learn has deep roots in relationships. Every brain is wired differently. We don't pay attention to boring things. Here's some bad news: "There is no such thing as multitasking. Repeat to remember. The folks at KIPP figured this one out: "The more elaborately we encode a memory during its initial moments, the stronger it will be. Remember to repeat. Lessons are divided into minute modules, cyclically repeated throughout the day. Subject A is taught for 25 minutes, constituting first exposure. Ninety minutes later the minute content of Subject A is repeated, and then a third time.

All classes are segmented and interleaved in such a fashion. Because these repetition schedules slow down the amount of information capable of being addressed per unit of time, the school year is extended into the summer. If that's too complicated or politically charged , John suggests review periods every three or four days. Sleep well, think well. John suggests matching chronotypes to schedules; some teachers and students could do the early shift, some the late shift. He also thinks the "[b]iological drive for an afternoon nap is universal. Stressed brains don't learn the same way. Simulate more of the senses. Smell has a particular shortcut to memory.

Vision trumps all other senses. Male and female brains are different. John suggests that there is some rationale for gender-specific classrooms and that at a minimum, we don't feed stereotypes. For more, check out the resources and blogs on BrainRules.